As I was filing them away, I looked back in my .plans at GarageGames and realized that I had never talked about it publicly. At least, the site search didn’t turn anything up. Well, I think it’s probably safe to do so now. 🙂

Way back in April of 2005, I wrote a Blitz3D loader in Torque for Adrian Tysoe. It loaded Blitz3D files, with all their texture and material data, and it did polysoup collision, as well. This was several years before I released the OPCODE-based poly soup resource, which I think is now (in some form) in the official Torque codebase.

I love seeing how graphics code comes together, so I thought I would share this with the world – you might like clicking through the images and seeing how each step changed things. By far the biggest pain point was parsing the (sometimes obtuse) Bitz3D format. The format might be a pain, but in the hands of a good artist like Adrian, it gave really solid results. This was all before shaders were mainstream, of course, but still – the sand had a nice specular highlight, there was lots of clever texture layering, and the whole thing was pretty fast to render.

The more interesting aspect to doing the B3D loader was the prevailing opinion in the Torque community at the time that loading a non-DIF/DTS format was impossible – as was deviating from the collision models those formats used (convex polyhedra mostly). I’m not quite sure where they got this idea, but it was awfully frustrating at times to see people beat their brains out on those formats when there might be better options for their specific situation.

Partially, I did this project to prove to myself that I wasn’t just bullshitting people when I said that writing a loader/renderer was easy (certainly easier than canceling your project because another format wasn’t working for you!). It took me a month or so of part time hacking to get it all together. It didn’t animate, but it was just for environments – DTS is actually an awesome format for characters, and the 3Space runtime is very tight, one of the best parts of Torque in terms of features. (Aside: I hope they get a good Collada->DTS converter as the main pipeline sometime soon!)

Two years passed before anyone put polysoup in without rewriting the rest of the engine to use some other physics SDK. Actually, I ended up being the one to integrate polysoup with DTS.

I was surprised no one else beat me to it! I brute-forced it – every triangle as its own convex. Torque ran this approach like a champ as long as you didn’t feed it tiny triangles. Did the same trick again when it came time to write Atlas1 collision a few months later, but that wasn’t really “polysoup” in a meaningful way for anyone since it only imported heightfields.

It’s interesting to me that the current Torque maintainer (and all around good guy) Matt Fairfax wrote loaders for .3DS, Quake3, and Unreal formats, and the maintainers that came before me (Rick Overman, Mark Frohnmayer, and Tim Gift) have also done things of this nature (in fact, they are at least partially responsible for DIF and DTS). I guess you don’t get to hold the reigns of TGE unless you’ve written a couple 3d renderers/loaders.

I think in total I’ve done 4 loaders with renderers – Blitz3D, Chunked LOD (for Atlas 1), Atlas2, and OBJ. Really, OBJ doesn’t count. Every graphics programmer in the universe has hacked up a OBJ loader – from Carmack on down.

In conclusion? I guess there are a few morals to draw from this nostalgia-inspired post:

Edit: Adrian Tysoe posted on GarageGames about his side of this experience – here’s what he had to say:

Heh, I remember working on this with you. I figured they were the starting point for some of the later torque advancements. Just wish that the DTS had been updated to support more than 1UV. Was pretty fun to work with and performance was decent.

The worst part was trying to match invisible torque terrain collisions to .b3d meshes just to get the nice water blending around the edges. The terrain used the coldet collision for the actual character and weapons etc.

Was pretty neat and I enjoyed having 2UV’s to playwith so I could bake my own lightmaps in 3dsmax of gile[s], in many ways the most useful thing to make TGE rendering look a bit nicer.

Here’s a couple more pics the project Jeremy and I started using it. 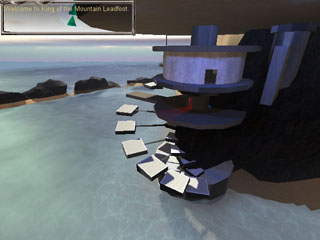 See https://bengarney.com/ and @bengarney for details. View all posts by Ben Garney

15 thoughts on “Blast From The Past: Blitz3D Models in Torque”